Update to our patients: Dr. Creed is retiring.
Close
×

Would you like to switch to the accessible version of this site?

Don't need the accessible version of this site? 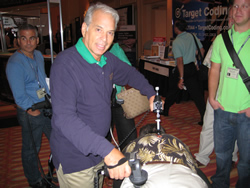 Why Dr. Creed Is Unique

Dr. Creed’s own healing from a severe injury brings him an awareness and understanding with his patients and student doctors.

A severe automobile accident left Dr. Creed disabled. For eight years,  2 and a half years spent in a hospital. Dr. Creed wore a body brace, special shoes, and used a walking cane. Hospital stays on a regular basis, and numerous physicians could not relive the pain or improve Dr. Creed’s condition. Frustrated by the sight of Dr. Creed’s ongoing disability and pain, an army buddy, Mickey Leff, carried him into a chiropractic office rather than taking him to the hospital again. Two hours with the chiropractor, Dr. Creed was able to walk without using his cane or body brace. After many months of continuous treatments Dr. Creed realized that his destiny was to be a chiropractor and give others the gift of life he had received.

Chiropractic and various alternative health treatments have enabled him to run several marathons in Hawaii. In 1989, Dr. Creed rode his bicycle in the Soviet Union on a US-USSR Friendship Bicycle ride, and then continued on his own, bicycling through Europe and the Middle East.

For the past 40+ years, Dr. Creed has devoted himself entirely to the study and practice of Chiropractic. With a Doctorate of Chiropractic, two degrees in biology, and Certified in Acupuncture his focus is in Spinal Bio-mechanics, Neurophysiology, Environmental Health Management, and Biochemical Individuality. Dr. Creed has been presenting a seminar series throughout the United States on various chiropractic techniques using instruments. He also has lectured in Europe, former Soviet Union, and Central America. Dr. Creed is a post graduate professor and a visiting  professor for the Scandinavian College of Chiropractic in Stockholm, Sweden.

Dr. Creed presently maintains a private practice in Miami, Florida and continues to provide doctor seminars to the professions.

Dr. Alan Creed has studied with:

Dr. Alan Creed was mentored by:

Manuals and DVD's based on seminars are also available

“FLYING THROUGH HEAVEN, WE BROUGHT SOMEONE BACK!”
Written by: Alan Creed, D.C.
Published February 2017 - THE AMERICAN CHIROPRACTOR

“A TECHNIQUE FOR A CHIROPRACTIC ADJUSTMENT”
Written by: Alan Creed, D.C.
Published December 2014 - THE AMERICAN CHIROPRACTOR